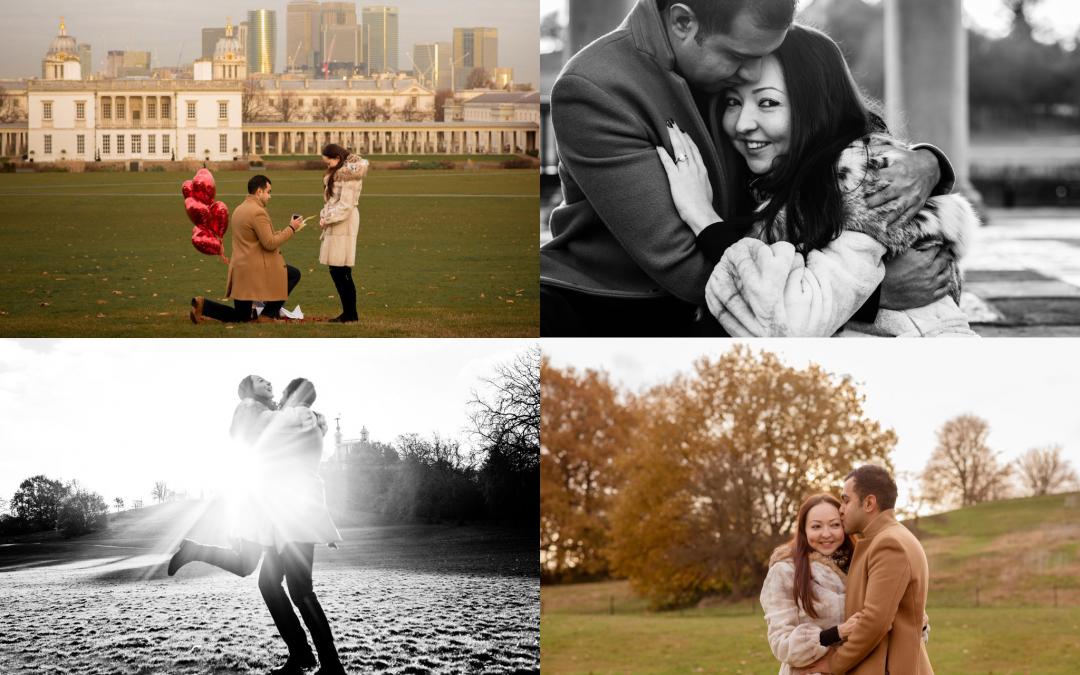 I answered the phone one Friday afternoon, a guy called Ricky nervously asks me if I’m free the next morning because he needs a photographer in Greenwich Park. He told me he was going to propose to his girlfriend and would like to have a photographer there to capture the moment. I must admit, I let out a little squeal at the prospect of capturing such a moment! So yes, of course I was free!!

About half an hour after than initial conversation we were on a recce for the perfect ‘proposal location’ in Greenwich Park. It had to have the view but it also had to be located close to the central pathway. Ricky was going to tell his girlfriend Malika he was taking her to lunch in Blackheath, so they’d have an excuse to walk through the park. The location he chose was perfect for them, right in between the Queen’s House and Royal Observatory – oh yes, and they’ll never ever forget the location, it’s a pretty famous spot… it’s only where time begins!!

Ricky was a man with a plan. It was going to be nothing less than perfect. So, he spent the day hunting down everything he needed for the big proposal. The idea was that he was going to have me set it up in the morning, this meant I took care of the bag and ring overnight (!!), after I set it all up they just happen upon it during their walk through the park on their way to breakfast. He hoped that Malika would be curious enough about the unattended balloons in the middle of the park that she would go over and check it out. Not only would there be balloons, but a classic Chanel handbag! Which would be surprise enough for any woman but the pièce de résistance – the beautiful rose gold, drop stone engagement ring, would be hidden in the bag. She would discover all of this as he reads an emotional heartfelt letter and gets down on one knee. Sounds like something right out of a movie…

Well guys, that’s exactly how it went. Everything was planned so meticulously that the plan he had in his head was the exactly what played out in real life. To top it all off, she said YES!